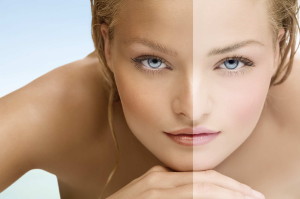 Pigmentation is the coloring of a person’s skin.The pigment melanin produced by Melanocytes, is  the substance in the body that is responsible for color of the skin.

Pigmentation is the coloring of a person’s skin.The pigment melanin produced by Melanocytes, is  the substance in the body that is responsible for color of the skin.

The most important substance determining  dark skin colour is Melanin. The light skin colour  is determined mainly by the bluish-white connective tissue under the dermis  and by the hemoglobin  circulating in the veins of the dermis.

In a healthy person skin will appear normal in color. If there is any change which causes the   normal cycle and  total turnover of the cells  the skin , it will show  as the colour change on the surface of the skin.

The skin can become either darker (Hyperpigmentation) or lighter (Hypopigmentation), according to the pathology present.Pigmentation on face reduces the glow in the face.

Hyperpigmentation is very common skin change where skin gets darker in spots, patches or can be seen covering the total skin itself. It  results from excessive cutaneous melanin deposition, either in the superficial layer of skin, the epidermis or the deeper dermis. The change can be seen sometimes as localized spots or as wide spreading patches.

Age – As the body ages, the natural cycle of skin shedding becomes low, and the dead cells tend to accumulate over the skin surface. As  the Melanocytes are present in the upper layer of the skin, the epidermis, the skin becomes more darker if the damaged cells are not removed.

Eventhough the Melanocytes decrease in number with age, the remaining cells enlarge in size and the cells accumulate unevenly on skin. This leads to patches and brown spots, referred as freckles and age spots.

As The blood vessels of the dermis become more fragile, they are easily bruised and leads to  bleeding under the skin, leading to discolorations.

Sun Exposure-    The melanin  pigment is the one which protects the skin DNA from mutation by sun damage. The skin responds to UV Rays  exposure by thickening of the stratum corneum cells and increasing the  melanin pigments in cells of the epidermis.

UVA can pass through the windows also and will penetrate to deeper layer also. UVB is usually gets blocked by window and is mainly affecting the upper layers of skin. Both the rays will stimulate the melanin to divide  and accumulate more, leading the skin to become more tanned and pigmented.

Hormonal Imbalances-  The most common Hyperpigmentation due to hormone imbalance is melasma. While there is a definite genetic component to the disease, it is generally triggered by hormonal changes.

Melasma occurs when the Melanocytes are stimulated by abnormal levels of progesterone and estrogen, due to  pregnancy, menopause or use of Oral Birth Control Pills. If Melasma affects epidermis, the discoloration will be darker and if it affects dermis, the change will be lighter. when both the layers are affected, it leads to give an appearance of mixture of darker and lighter pigmentations.

Postinflammatory Hyperpigmentation –   This usually develops after resolution of inflammatory skin eruptions like acne, contact dermatitis, or atopic dermatitis.  This is the result of overproduction of melanin after cutaneous inflammation.

When it is mainly affecting the epidermis, there is an increase in the production of melanin and transfer of them to the surrounding kratinocytes. PIH in the dermis happens , when there  is a release of large amounts of melanin,  due to damage to basal keratinocytes. The free pigment is then phagocytosed by macrophages and produces a blue-gray appearance to the skin at the site of injury

Other Diseases and Conditions-

The colour and size of the dark spots and patches on the skin, show changes according to the layers  where the damages are  actually happening.  As the available treatments in the market are able to reach mostly  the upper layer only,  without going  to the internal layer damage, they are having limitations in their actions and regenerating power.

The Siri Care clears both the upper and lower  layers of damage and rejuvenates the skin from deep.

With the first step solutions, this helps in removing or fading the discoloration in the skin. The rejuvenating second step will encourage collagen production helping new cells to grow and tightening the skin. This will result in a more even, healthier, glowing, fresher, younger looking skin tone.

Almost all the types of skin damage due to Hyperpigmentation can be treated with Siri Care. So any part of the body, which is tanned and pigmented, like hands, back, neck and on the whole body itself, to get a renewed and refreshed skin.Pigmentation creams can reduces the dark spots and tanned skin.

The growth factors and stem cells present in the solutions will encourage the  skin layers to produce more and more new fresh cells giving the skin new glow and softness. As new capillaries are also formed, the cells will be healthier , as they get more nutrition.Best Treatments for pigmentation is available now.

The use of regenerating moisturizer and strong sun protection are also advised to go on with the glow and freshness. The underlying cause of hormone imbalance  is also  should be treated to prevent further recurrence of the patches and spots on the skin.